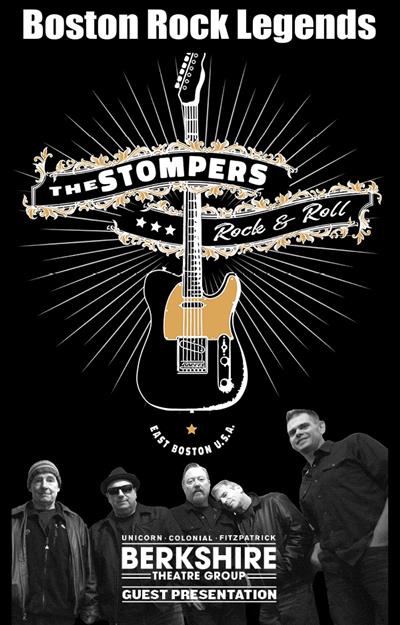 Legendary Boston rockers, The Stompers, will make their first Berkshire County appearance in decades when they hit the stage at the Colonial on Saturday, November 13th.

The group was formed in East Boston in 1977 by lead singer/guitarist and songwriter Sal Baglio and drummer Mark Cuccinello and quickly became Boston’s most popular band. As the band performed night after night in the many Boston clubs and bars of the day, word of their incredible live performances and catchy, high energy rock & roll tunes began to spread. In the coming years, they performed at almost every college, roadhouse (including Woody’s in Washington, MA), nightclub, and concert hall in New England and began to attract the attention of many major record labels. In 1980, they signed with Boardwalk Records, which at the time was the home of Ringo Starr, Harry Chapin and Joan Jett. They toured with both The J. Geils Band and The Beach Boys and after recording with the Boardwalk label, the group went on to record for Polygram Records. At Polygram, the band became an FM radio favorite as many stations around the country featured Stomper’s songs such as “Coast to Coast,” “Never Tell an Angel,” “Rock Jump and Holler,” “American Fun” and “One Heart For Sale” on their daily playlists. The Boston Globe named The Stompers as Boston’s Best Band for six consecutive years in the ’80s, no small feat considering the many talented bands emerging from Boston during the era. The group’s popularity was unmatched in New England throughout the ’80s.

The Stompers continue to perform their original brand of Boston rock & roll and 2017 marked the group’s 40th anniversary. Their amazing songs sound as great as ever and their live performances never fail to provide their audience with a remarkable concert experience.

Stompers fan Adam Sandler included their songs “American Fun” and “Never Tell an Angel” on the soundtracks of his Grown Ups and Grown Ups 2 movies. The group’s legion of spirited and loyal fans have been known to drive for hours to catch one of their live shows and has kept the group performing for decades.

From the bars of Boston to national prominence, The Stompers are a true rock & roll success story. If all you really want is some “American Fun” don’t miss The Stompers’ return to The Berkshires at the Colonial.