Part 2: Dine Around the World without ever leaving the Downtown! 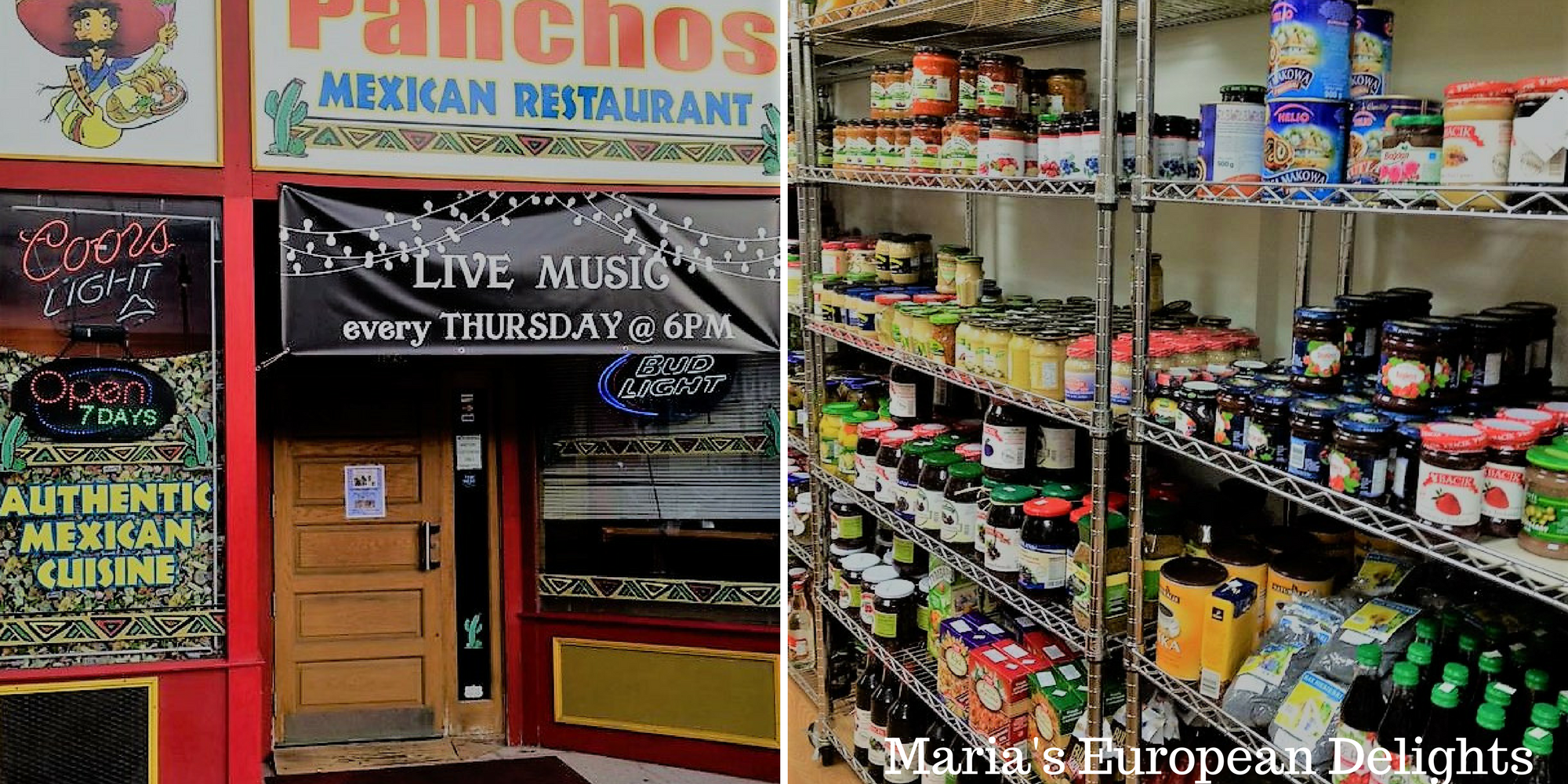 We caught up with some of our local owner/operators to hear more about their stories and how their food is inspired.

Maria’s European Delights & Deli, owned and operated by Maria Sekowski, carries groceries and treats from Eastern Europe, and places like Poland, Russia, Ukraine, Croatia, and Hungry. Maria also has a deli case stocked with deli meat, kielbasa, and cheeses. Take home some fresh cut meat or try one of Maria’s deli fresh sandwiches. The sandwiches on the menu vary based on the deli selection but often feature Maria’s famous, homemade sauerkraut. Reubens, an Italian Stallion sandwich, kielbasa on a bun with mustard and sauerkraut are just some of the featured sandwiches which range in price from $6.50 to $8.25. Maria also offers homemade soups which are usually a combination of Polish and “Maria” inspired: from mushroom to pickle to Barszcz soup, all soups are chalk full of ingredients.

Maria was born in Glogow, Poland and lived in Jankowa, Zaganska on the Zielona Gora province before coming to America as a young girl in 1965. She describes life in Poland as simple. The youngest of three children, she remembers playing cards on Saturday nights with her family, playing outside with other children for fun after school, and no television. She recalls people getting together at her house to talk about the war and to play music. Her father played the accordion and violin, and the children would sing along. It is this early musical education that has shaped the Maria we see today at her store, singing along to the music of her favorite artists.

Maria learned to cook from her mother and from raising a family. She says, “If you like to cook and like to eat, you like to please people with food”. “Life is about food”, she says. “Cooking is like improvising; it’s like music.”

Maria opened her first deli in Great Barrington in 2007 when her late husband lost his job. She came on to run the business full-time in 2009, and four and half years ago she moved the business to Downtown Pittsfield. According to Maria, some of her most popular items are Polish grilling kielbasa, her homemade fermented Sauerkraut, Pierogi for Easter and Christmas, and her selection of Polish and European chocolates.

In addition to the spices, preserves, and sweet and savory grocery items at her store, music also fills the space. On the floor lay a box of cassette tapes, sheet music is open to a crooner ballad on her keyboard, and a microphone lay by her laptop ready for anyone who might be willing to sing karaoke while they eat their lunch. Every day Maria starts her day with her favorite Frank Sinatra CD, and she fills her store with her generous spirit and her love of music. She welcomes you all for a bite to eat and a song.

The next stop on our “world tour” is Panchos Mexican Restaurant which specializes in cuisine from Central Northern Mexico. Owners Jesus Chairez and Nataliya Chairez-Volakh opened Panchos on North Street thirteen and a half years ago in a smaller location next door to their current one. Two years later, they expanded into their current location which featured over twice the space, and they added more traditional Mexican dishes. Natalyia is from Belarus, a country in Eastern Europe. Her husband, Jesus, was born in Guadalajara, Jalisco, a city in the western part of Mexico. He was interested in the local fare and took some classes there in Mexican cuisine. When he was in his twenties, about 30 years ago, Jesus came to America. Before he opened Panchos in Pittsfield, he operated a similar venture in Lenox, MA. What Jesus and Natalyia love about being in Downtown Pittsfield is both the foot and vehicular traffic that their location provides as well as the customers who work Downtown and stop in for lunch. Third Thursdays are also a highlight.

All of the recipes that Jesus uses today at Panchos are a combination of family recipes, the knowledge he brought from his homeland, and his own creations. Panchos serves many homemade, authentic Mexican dishes including Flautas, Tostadas, Sopes, Tamales, Empanadas, Rebosos con Mole, and Tortas.

They also offer burritos, authentic and American style tacos, sizzling fajitas, seafood dishes, salads, soups, desserts, lunch specials, drink specials, and kids’ meals. Every Tuesday is all you can eat “Taco Day” all day. Panchos Mexican Restaurant is open 7 days a week for lunch and dinner. Live music every Thursday from 6 pm to 9 pm. Hours of operation are Monday through Friday: 11 am to 10 pm, Saturday: 11:30 am to 10 pm, and Sunday: 11:30 am to 9:30 pm.

Flavours Restaurant “features flavors from around the world, including Malaysian, Asian and America cuisine”. Owner and chef, Sabrina Tan, was born in Malaysia to Chinese parents. Her mother owned a restaurant in her home town, and she learned a great deal from her. Sabrina considers her cooking “a truly Malaysian Chinese home cooked meal”.

“Malaysian food” is actually influenced by the many cultures that inhabit Malaysia including Malay, Indian, Eurasian, Chinese, Nyonya and the Indigenous peoples of Borneo. Sabrina takes great care to prepare her dishes to order with the freshest ingredients in the tradition of her homeland.

Stop by Flavours Restaurant for lunch, dinner, or dessert!

“Davide Manzo, chef and owner of Trattoria Rustica, was born and raised in Pompeii Italy. He is third generation of Cucina Napoletana. With Trattoria Rustica he has created an authentic Italian experience in the Berkshires: from the decor, built with his own hands, to the artful preparation of “Antichi Sapori”, the ancient flavors of Pompeii. He is passionate about his homeland, his culture and traditions.

As a child, Davide made the tragic “old city” of Pompeii his playground. It was there that he began his lifelong fascination with ancient myths and history.  This experience combined with the strong influence of his grandmother and grandfather, who owned and operated a trattoria on the Amalfi Coast, was the basis for his present endeavor. Davide immigrated to the United States in 1970 at the impressionable age of 15. He worked in construction while taking in the American experience always maintaining a firm connection to his family and roots.
He also worked alongside his sister and mother when they opened an Americanized version of a pizzeria. As he matured, he began recognizing the presence of a muse which would drive him to want to create an authentic experience, one that paid tribute to the masterful skill of presenting and preparing food.

Davide often engages in active dialogue with his patrons, sharing with them about his ideas, educating everyone who comes in the door in one way or another about the food, wine, people, music and traditions of Italy and especially his native Pompeii. Davide has an infectious and generous energy that keeps people coming back. His enthusiasm about his culture is portrayed in a myriad of ways including the musicians he selects to perform, the late night outdoor Italian movies in the courtyard, his choice of intelligent and dedicated staff, his generosity of spirit, and most of all his delicious and authentic Cucina Napoletana.” (Bio reprinted with permission from http://trattoria-rustica.com/)