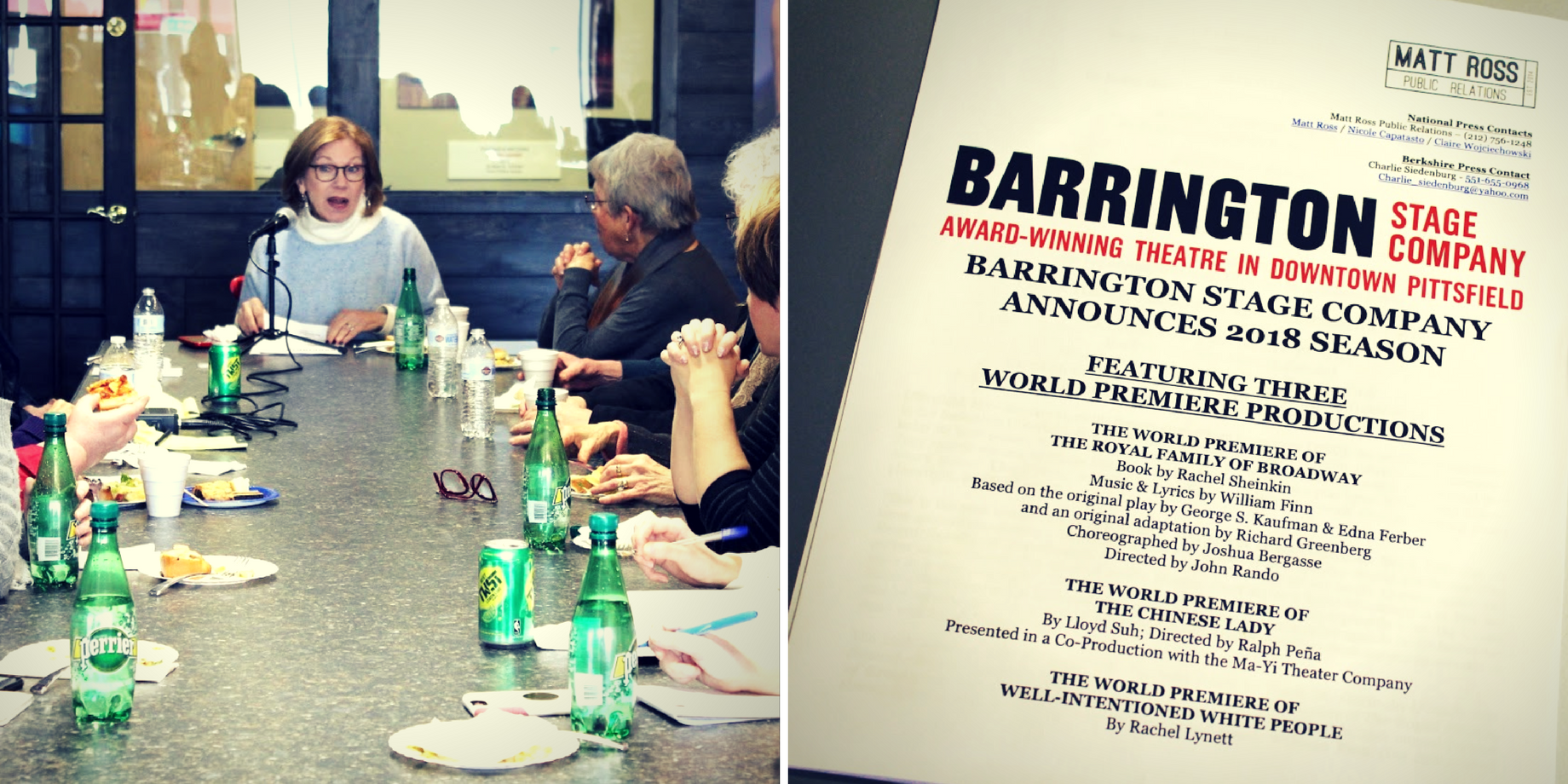 A bustling North Street in downtown Pittsfield was the backdrop for today’s 2018 Season Announcement for Barrington Stage Company. Interested parties gathered round the table at BSC’s beautiful, newly renovated Wolfson Center as Artistic Director Julianne Boyd divulged one by one the exciting plays, musicals, and performances to compose this year’s line-up. The 2018 line-up will include three world premieres and a provocative, varied selection of works in a season Boyd deemed “a season of women’s stories at BSC”.

First up, opening May 27th on the St. Germain Stage, will be “Typhoid Mary” directed by Matthew Penn. “This is the story of Mary Mallon, known better as Typhoid Mary, in her personal battle between religion and science.” Playwright, Mark St. Germain, has revisited a work he wrote in the 1980s, and revised it brilliantly for today’s audiences.

Next on the St. Germain Stage will be “The Cake” written by Bekah Brunstetter, a writer and producer on NBC’s “This Is Us”. This play tells the story of a conservative Christian baker who is approached to make a cake for a gay wedding. “Faith, family and frosting collide in this touching and timely new comic drama” directed by Jennifer Chambers. “The Cake” opens June 24th.

“A Doll’s House, Part 2” by Lucas Hnath opens on the Boyd-Quinson Main Stage July 15th, directed by Helen Hayes Award winner, Joe Calarco. “‘A Doll’s House, Part 2’ explores, in uproarious fashion, the emotional chaos that results when a wife returns to the home she left 15 years earlier”. Knowledge of the first part of the story is not required to thoroughly enjoy this production. However, for those who are interested, there will be a reading of a “A Doll’s House” prior to the production.

The World Premiere of “The Chinese Lady” by Lloyd Suh will be next up on the St. Germain Stage. This production directed by Ralph Peña will be presented in co-production with the Ma-Yi Theatre Company. “In 1843, Afong Moy was brought from Beijing to America and put on display as the ‘Chinese Lady’. Over the next 45 years, she performed in a side show for the American public that both defined and challenged her own view of herself, while witnessing stunning changes surrounding what it means to be American.” This production opens July 25th.

“West Side Story” will take over the Boyd-Quinson Main Stage beginning with previews on August 3rd and running through September 1st. Julianne Boyd will direct alongside choreographer Robert La Fosse in a celebration of the 100th birthdays of Leonard Bernstein (music) and Jerome Robbins (original director and choreographer of “West Side Story”). La Fosse along with his assistant Nicholas Garr (who played Bernardo on Broadway) are both experts in Jerome Robbins’ choreography, and along with Boyd, will honor the perfection of Robbin’s choreography by reproducing it for this production. “The struggle (for two young lovers) to survive in a world of hate, violence and prejudice (results in) one of the most innovative, relevant and deeply moving musicals of our time”. Boyd has named “West Side Story” BSC’s community-minded production of 2018, and is working with Pittsfield Police Chief Michael Wynn on related programming to benefit the community. (Book by Arthur Laurents and lyrics by Stephen Sondheim.)

Last up on the St. Germain Stage is the World Premiere of “Well-Intentioned White People” by Rachel Lynett which opens on August 22nd. “After a racial attack she wants to forget, Cass is pushed into ‘making an example of it’ by her well-intentioned (white) friends and classmates. (The play) explores race and friendship and how ‘good intentions’ are not always the best intentions.”

The closing performance on the Boyd-Quinson Main Stage is Tennessee Williams’ “The Glass Menagerie” directed by Julianne Boyd. Hailed as one of the greatest American plays of the 20th century, this production opens on October 7th.

The 2018 BSC Youth Theatre production was also announced today. Julianne Katz will direct Roald Dahl’s “James and the Giant Peach” at the Berkshire Museum beginning on July 25th. Words and music for “James and the Giant Peach” are by Oscar and Tony Award winners, Benj Pasek and Justin Paul, known for “La La Land” and “Dear Evan Hansen”. BSC’s Youth Theatre will partner with The Berkshire Athenaeum for a literacy series to coincide with the production.

There will also be several cabarets and a reading of a new musical by BSC Alum, Niko Tsakalakos. Single tickets for BSC’s 2018 Season will available for purchase on March 6, 2018, but there are a few opportunities to get your BSC fix before then!

Tickets are on sale now for the 7th Annual “10×10 New Play Festival” at the St. Germain Stage. From February 15th through March 4th, as part of Cultural Pittsfield’s 10×10 Upstreet Arts Festival, enjoy 10 ten-minute plays by 10 playwrights, performed by 6 actors and directed by Julianne Boyd and Matthew Penn. Enjoy the best ten plays narrowed down from over 150 submissions for this year’s festival!

Boyd said that she “hopes we open up a dialogue with the community” during the 2018 Season at BSC. The shows on the horizon are thought provoking, poised to inspire, and hopefully will spur action and change. This is a season of standout shows not to be missed!