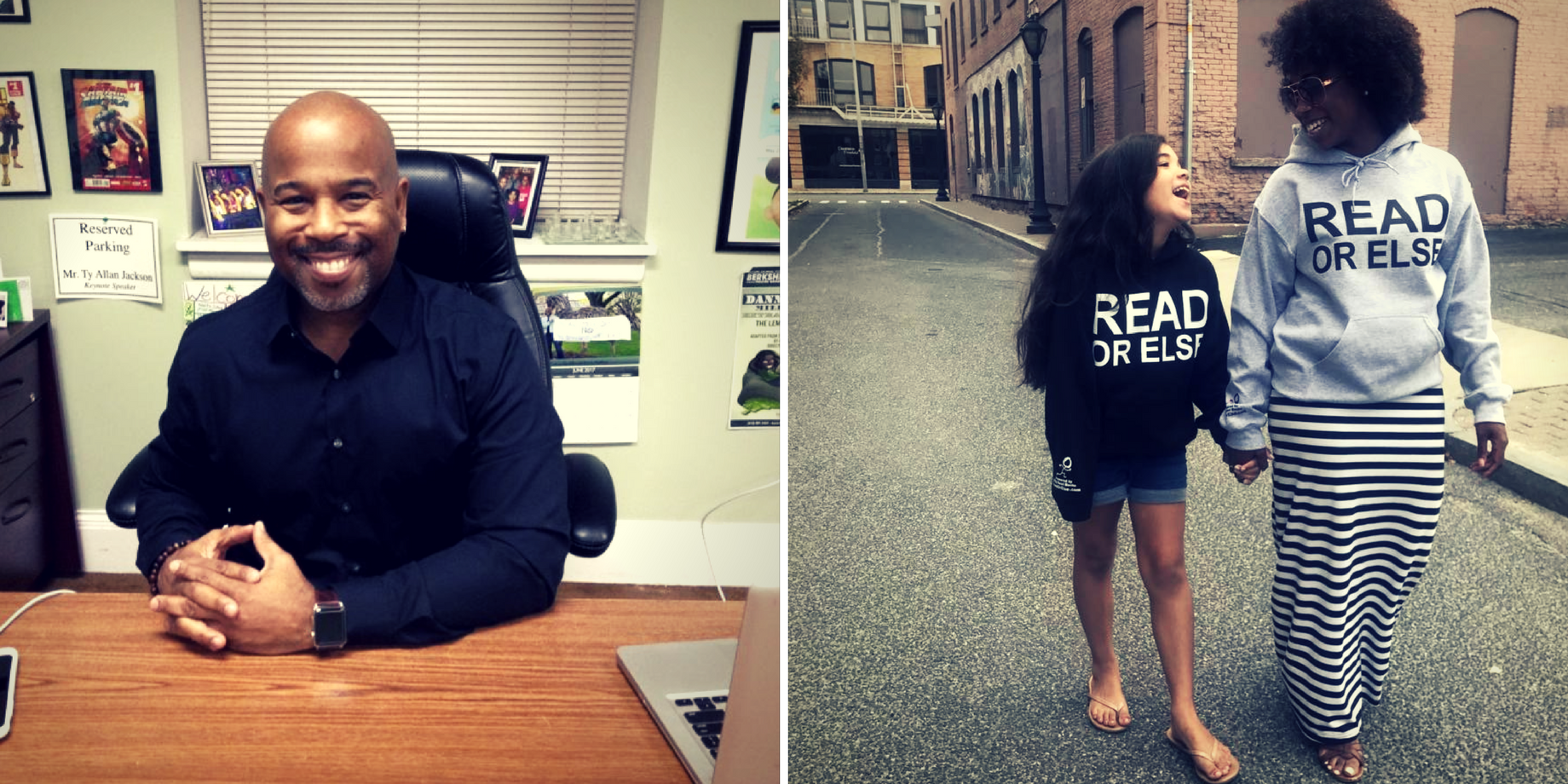 For Pittsfield resident Ty Allan Jackson, no passion burns brighter than to instill the value of reading in children. Jackson, the author of four children’s books, is also an inspirational speaker, entrepreneur, and leader of a social media movement, #ReadOrElse. Since writing his first book, “Danny Dollar Millionaire Extraordinaire-The Lemonade Escapade”, in 2009, Jackson has tirelessly created his own mini-empire right here in downtown Pittsfield using his books and his journey into adulthood as a means to reach out to children and adults across our country.

Ty Allan Jackson was born in the Bronx, New York in the 1960s. He was raised by a young, single mother as his father was incarcerated for most of his childhood. Growing up in the 1970s and without any strong male role models in his life, he found his role models on television. “George Jefferson was my dad”, says Jackson, “so was James Evans from ‘Good Times’”. There were valuable lessons to be learned from these men, and Jackson took them to heart.

“(The other) part of my DNA was witnessing in the Bronx the birth of hip hop music (and seeing it) develop into this entity that overshadows the globe today. It was important for this shy little kid who just didn’t know his way in the world. It helped me build my voice; it helped give me confidence; it helped me learn to work the system and peak behind the curtain in this world… (and) how to learn to work around (any obstacles) by building your own voice”.

Jackson and his family made the move to Pittsfield 14 years ago to enjoy an easier life within what he considers a great community.

“Pittsfield allows a person who’s a New Yorker with a hustler’s mentality to come here (to a smaller place) where things are much slower-paced and not as volatile… (and) take those New Yorker characteristics and build your own brand, make your own niche, (and) work the system to your own advantage as an entrepreneur”.

Before becoming a successful author, Jackson worked as a sales representative for Allied Waste, with downtown Pittsfield making up most of his territory. Jackson credits the connections he made with downtown business owners, city leaders, business professionals, and community members during his tenure at Allied Waste as being crucial to his success now as an entrepreneur.

In 2009, Jackson’s seven-year-old son asked him if he could open a lemonade stand. After searching for books to teach children about finance and entrepreneurship without much success, Ty determined it was up to him to create something that he felt his son and other children needed; and thus, “Danny Dollar Millionaire Extraordinaire-The Lemonade Escapade” was born.

Jackson was determined to reach more children by getting his book published. After being rejected by over 150 agents, he decided to launch his own publishing company, Big Head Books, in June of 2010; and by December, he had self-published his first book. Jackson sold 1000 books in the first month, and in the second month, Carver Federal Savings Bank in New York City, the largest black owned bank in the country, bought 1000 copies of “Danny Dollar”. Figuring that being able to sell 2000 copies in two months working part-time justified going full-time into this new business venture, Jackson left his job at Allied Waste in February of 2011. He has been all-in ever since.

Jackson has authored four books to date: “Danny Dollar Millionaire Extraordinaire-The Lemonade Escapade”, “You Are Amazing / I Am Amazing” (featuring images of 150 children from the Pittsfield Public School System), “The Supadupa Kid”, and “When I Close My Eyes”, and he is currently working on the sequel to “The Supadupa Kid”.

Jackson believes reading is a vital aspect of life. “I don’t think it’s much different than food, shelter, clothing”, he says. “When reading is not a part of the home, children have a lesser chance of being a thriving adult”. Jackson’s goals as an author and a public speaker are to make reading cool, fun, and interesting, and to represent “children of color who don’t see themselves reflected” in literature. To Jackson, “success looks like a child opens that book and smiles and says, ‘this book was made for me; I’m being represented here; I count; I matter’…specifically black children, my characters are predominately black.”

Writing has opened the doors for Jackson who says his main purpose in life is to be a motivational speaker for children. “Writing is the avenue to get to speak to children… But my purpose is to travel around the country and teach and give children hope”. Children can see themselves in his story, and he says his presentations are a mix of “Kevin Hart and Tony Robbins but for kids”. Jackson brings his fun and relatable presentations about overcoming obstacles and achievement to schools in low income and disenfranchised communities across the United States.

Jackson is also working on another way to reach children in schools across America. Jackson’s first book, “Danny Dollar Millionaire Extraordinaire-The Lemonade Escapade” made its way into the hands of economics professor, Abdullah Al-Bahrani, at Northern Kentucky University. Al-Bahrani is collaborating with Jackson to create “Danny Dollar Academy”, a one-week program for low-income, elementary school students focused on financial literacy and entrepreneurship. The corporately sponsored program, piloted in Kentucky last year, will debut in four Springfield, MA area schools next month as well as six additional schools in the Kentucky/Ohio area.

Jackson is also reaching out to adults in the Berkshire County House of Corrections. He plans to launch “The Overcome Project” (TOP) sometime in early 2018. This personal development program is designed to help the inmates better their lives by instilling the importance of what he feels are the three pillars of success: Personal Development, Family Engagement, and Entrepreneurship.

A wiz at Social Media, Jackson is also the driving force behind the “Read Or Else” movement which he co-founded with Eddie Taylor. Big Head Books is a for-profit company, but its mission is “to expose children to the JOY of reading”. One way that Jackson is spreading the word is through sales of his “Read Or Else” clothing. “With the purchase of a ‘Read Or Else’ garment, a copy of “Danny Dollar Millionaire Extraordinaire-The Lemonade Escapade”, a children’s book that promotes financial literacy, will be sent to a child in a designated homeless shelter or Title 1 school.” Purchasers of the “Read Or Else” clothing are encouraged to post a picture of themselves or a loved one wearing the garment along with the hash tag #ReadOrElse. Hundreds of people have posted interesting and inspiring images of themselves wearing the “Read Or Else” merchandise on social media, even images from exotic places! Jackson credits the viral success of #ReadOrElse to the easy buy in from the consumer: he is selling a cool shirt with a great message, and the purchase sends a book to a child in need, what’s not to get behind? Plus, social media is free and it’s where we communicate, it’s the perfect place to create a movement.

He also credits his success to the rapport with the city and the community that he built when he was a salesperson for Allied Waste. He has built upon these relationships, having since served on several boards and committees within the Berkshires. Currently, he serves on the board for Greylock Federal Credit Union. His network of friends and colleagues have gotten behind the “Read Or Else” movement and can be seen on social media supporting the cause.

Jackson’s books are also inspiring local collaborations. Last year, Berkshire Theatre Group adapted “Danny Dollar Millionaire Extraordinaire-The Lemonade Escapade” into a touring play with over 40 performances; and currently, Barrington Stage Company is working on a musical/hip-hop version of the “The Supadupa Kid”. Entering into partnerships is part of being successful in the Berkshires. “It’s the social dynamic of how Berkshire County works: everyone knows one another, everyone sees the work that you’re doing, and (if they) find it of value (they want to collaborate) … I don’t believe my books are adapted into plays in NYC.” Jackson is grateful for these opportunities to showcase the work he has been doing and even more grateful to further “represent children of color in the worlds of theatre and literature”.

“It’s people who are the outsiders, not the insiders, who are changing the dynamics of how products and services work”, says Jackson. “Today’s entrepreneur is different: they don’t need a degree, and average, everyday people have hope”. Jackson, once an outsider to the world of literature, is on a steady climb to do just that, change the dynamics of how literature is created and received.

“Big Head Books, LLC is a literacy organization with an educational and socially conscious mission. Our goal is to expose children to the JOY of reading. By visiting schools, libraries, youth organizations and correctional facilities, we entertain and empower kids while sharing with adults the importance of reading in a fun, upbeat and contemporary way.”