The Whitney Center for the Arts to produce a full 2018 performance season for the whole family! 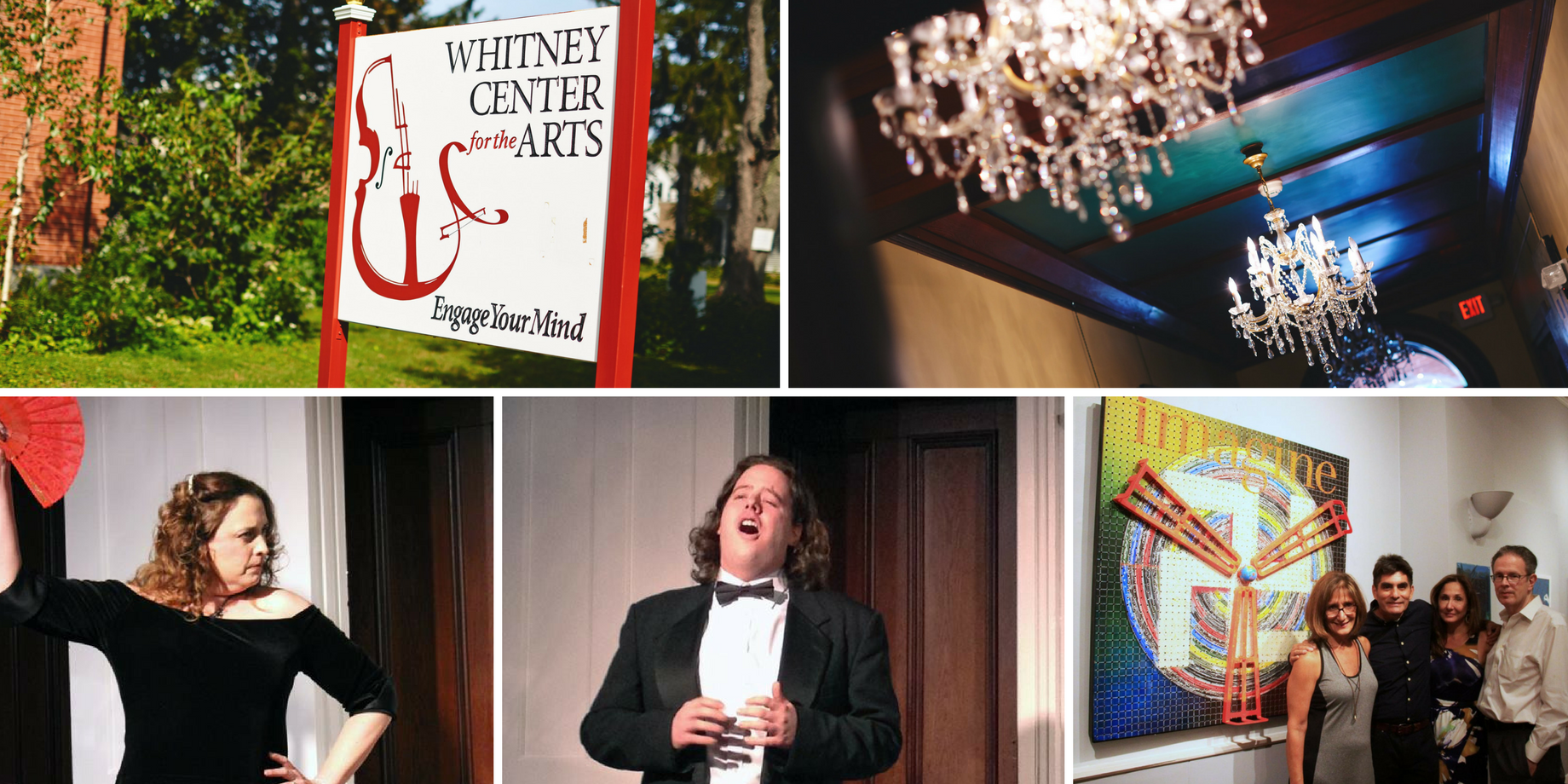 The Whitney Center for the Arts, located in the historic 1865 Thomas Colt House on Wendell Avenue, is adding a new element to its already highly-successful arts programming. “The Whit”, as it is lovingly referred to by those who visit its high caliber art shows during Pittsfield’s First Fridays Artswalk, is adding performing arts producer to its resume. Under the direction of Ghazi Kazmi, the founding Executive Director of the Whit, Monica Bliss has dived head first into her newly created position of Director of Performing Arts at The Whit, and in her short tenure, has already created a dynamic lineup of programming designed to meet the needs of all members of our community. The Whit will host an array of monthly programming including Princess Tea Parties for the little ones, Open Mic Nights for teens, the “Opera Notte” for opera fans of all ages, fully staged plays, live bands, and a monthly cabaret series geared towards those who prefer an earlier showtime.

The Whitney Center for the Arts, the former home of The Women’s Club of the Berkshires, was established by Pittsfield native Lisa Whitney in 2012. Lisa’s vision was to save this historic building and turn it into a creative hub within the Cultural District of Pittsfield. The Whit already produces monthly art shows in its “Gallery W” and “Colt Gallery” and has been home to a variety of performances since its inception. However, after its resident theatre group, The Town Players of Pittsfield, grew out of the space and returned to their former home at Berkshire Community College, Ghazi and Lisa knew that it was time to produce their own programming (although they still welcome outside groups). “We want to produce performing arts that are accessible to everyone and specifically to people of all ages…. we have programming for children, programming for teens, and programming for people who enjoy a more accessible, earlier time to attend the show…. We tried to really think about what the needs were in our community for shows”, says Bliss. “We are also paying all of our performers. We are offering paid positions to teens, students, and professional performers in our community. Really the vision is accessibility, creating creative outlets and paid creative positions, and high-quality performances.”

Monica Bliss, the new Director of Performing Arts at The Whit, is a resident of New Lebanon, NY. Monica studied opera at the Hartt School of Music and theater at both Berkshire Community College and the Massachusetts College of Liberal Arts. Bliss is an active professional opera singer with a strong performance background. She has also been involved with the Town Players of Pittsfield since she was in high school, and most recently, served as their President and Publicity Chair. She also directed the Town Players’ annual production of “Christmastime in the City” which was a sell-out all three years (and which will be brought back to The Whit this winter as The Whit’s annual community production). Bliss also served as a Sales Manager for Barrington Stage Company before pursuing her greatest passion full-time, caring for her two daughters and two step daughters. The job at The Whit was created just as Bliss’s youngest daughter began attending kindergarten full days, and Monica jumped at the opportunity to work with two avid supporters of the arts in our community (Ghazi and Lisa).

Over the years with Barrington Stage Company and the Town Players of Pittsfield, Bliss received a lot of feedback that an 8 pm showtime is too late for some patrons. This led her to create The Whit’s new monthly cabaret series, the “Early Bird Cabaret”, featuring “two of her favorite performers in the Berkshires”. The series is geared towards those who enjoy an earlier showtime (all shows will start at 6 pm) and will also feature a catered dinner to accompany the show, all included in the ticket price.

The inaugural Early Bird Cabaret, “Songs of Love”, will take place on Tuesday, February 13th, just in time for Valentine’s Day. “Steve Hassmer, who has performed in a National Tour of ‘My Fair Lady’ and recently performed the role of Emile de Becque in ‘South Pacific’ at the Mac-Haydn Theatre, joins Kimberly Gritman, who has delighted audiences with her lovely vocals in numerous local productions, and pianist Jeff Hunt, for a celebration of song!” Tickets include a 3-course dinner with a soda or coffee and can be purchased on The Whit’s website. The Early Bird Cabaret will return with “Shades of Green” on Thursday, March 15th.

“Opera Notte” is making a return to The Whit on Saturday, February 17th at 8 pm as part of Pittsfield’s 10×10 Upstreet Arts Festival. “Opera Notte” has always been a popular series at The Whit which The Whit’s Executive Director Ghazi created as a passion project to emulate a favorite opera club in New York City. The comeback performance of “Opera Notte” (or “Opera Night”) will feature “The Top Ten Most Beloved Operatic Arias of All Time” as performed by 9 professional opera singers and 1 local student with a promising operatic talent. The performers will be accompanied by Carlton Maaia II, and the evening will close with a short encore performance. In keeping with the 10×10 theme, tickets for this event will only be $10 and can be purchased online or at the door. Beer, wine, and light concessions will be available for purchase.

Bliss is also very excited to host affordable and no-cost children’s programming at The Whit. There will be a monthly “Princess Songs & Tea Party” which will feature three amazing young singers from local high schools. Emma Foley from Taconic, Brianna Nicola from PHS, and Taylor Robinson from New Lebanon High School will delight young audiences as Princess Blue, Princess Purple and Princess Pink. The three will present a concert of Disney music in a variety format as the audience is served a tea party including tea sandwiches. There will be a meet and greet after the performance with all three princesses and a princess photo booth with backdrop and props. Parents/Guardians must take the photos. The all-inclusive ticket price of $10 per person also includes a balloon to take home. The first “Princess Songs & Tea Party” will be held during school vacation week on Tuesday, February 20th from 1 to 3 pm.

Bliss has also tackled the real need for afterschool activities for teens with The Whit’s monthly “Teen Open Mic Night”. The Whit has partnered with Rock On to host a $5 monthly open mic night for teens hosted by a different young musician from Rock On each month. The inaugural “Teen Open Mic Night” will be hosted by Grace Ida Marks on Wednesday, February 28th from 7 to 9 pm. Tickets can be purchased at the door. Stay tuned for more teen-centered events to be announced.

The Whit will also showcase bands as part of its new programming. Join The Whit for a Saint Patricks’ Day brunch on Sunday, March 18th at 11 am, and enjoy “The Celtic Sounds of Below the Gaff”. “Below the Gaff features female and male vocals, captivating vocal harmonies, fiddle, tin whistle and mandolin with the rich accompaniment of a guitar and upright bass. Below the Gaff’s influences include: Flogging Molly, Young Dubliners, Dropkick Murphy, The Pogues and The Chieftains.” The ticket price includes a catered Irish Brunch and Irish Coffee and Tea. The band will be playing the Iron Horse in Northampton the evening before, but Bliss says “their music also lends itself to a brunch… The woman’s voice reminded me of Dolores O’Riordan from the Cranberries, and (once I discovered Below the Gaff,) I just couldn’t stop listening to her voice, so I had to contact them about playing at The Whit.”

On April 21st, the band The Sea The Sea will take over The Whit in a coffee house-style performance. The Sea The Sea “is an Upstate New York based indie folk-pop duo-band featuring what Huffington Post calls, ‘Two of the loveliest male-female voices you might ever hear this or any other year.’ Their 2016 release, the six-song EP In the Altogether, recently earned features by Apple Music including Best of the Week and A-List Singer/Songwriter.” Bliss is excited to bring these performers to the Berkshires as they recently completed a songwriting residency at her daughters’ school, where they taught the students the entire songwriting process culminating in the production of some terrific songs. The ticket for this evening performance will include a bottomless coffee or tea and there will be a cash bar selling beer and wine.

Lastly, The Whit is thrilled to be producing and presenting high-quality theatrical performances for the 2018 season. Local actress, Diedre Bollinger, will star in a one-woman play, “The Last Flapper” by William Luce in March. This funny comedy with serious overtones is directed by Carl Ritchie and is based on the stories and letters of “Mrs. F. Scott Fitzgerald: the glamorous, fun loving, and tragic Zelda. Luce reveals the contradictions and mysteries of an extraordinary woman while fashioning a moving, yet witty play. Set in an insane asylum in Asheville, NC, Zelda tells of her innocent rebellion as a southern belle, of her destructive marriage, and of her mental disintegration.” The show will be presented with special arrangement with Samuel French, Inc. Tickets are available online now for Friday, March 23rd at 8 pm, Saturday, March 24th at 8 pm, and Sunday, March 25th at 2 pm.

Bliss will be directing “The Vagina Monologues” by Eve Ensler, and it will be performed at The Whit September 14th through the 16th. “This is a show I’ve been wanting to direct and bring back in this political climate”, says Bliss. “I’m passionate about women’s health and society’s comfort with the words and language needed to make women’s health accessible.” Auditions will be held this summer. “I’m excited because there are so many ridiculously talented actresses in our community; I can’t wait to audition this piece and get these actresses working”.

There will be more shows announced as summer approaches, but the final thing to be announced at this time is that The Whit will be presenting a special, one night only presentation of “The Laramie Project” on Matthew Shepard’s birthday, Saturday, December 1st. Twenty years after Matthew was killed, The Whit will be hosting a “Celebration of Matthew Shepard Art Show” for the month of November with a closing reception on December 1st preceding the performance. This evening event will be a celebration of the life of Matthew Shepard. Sara Clement, local photographer and activist, went to college with Matthew and they were very close friends. Sara has taken many beautiful photographs of Matthew, and she will headline the exhibit as well as speak at the reception. Sara will also display some of Matthew’s possessions and things that he gave her, as well as mementos of things they did together. There will be a call to artists later this year welcoming themed submissions for the show.

Stay tuned to The Whit’s website for more performances and events to be announced. It is sure to be an exciting 2018 performance season in downtown Pittsfield!!