The Past, Present and Future of the Pittsfield Fourth of July Parade 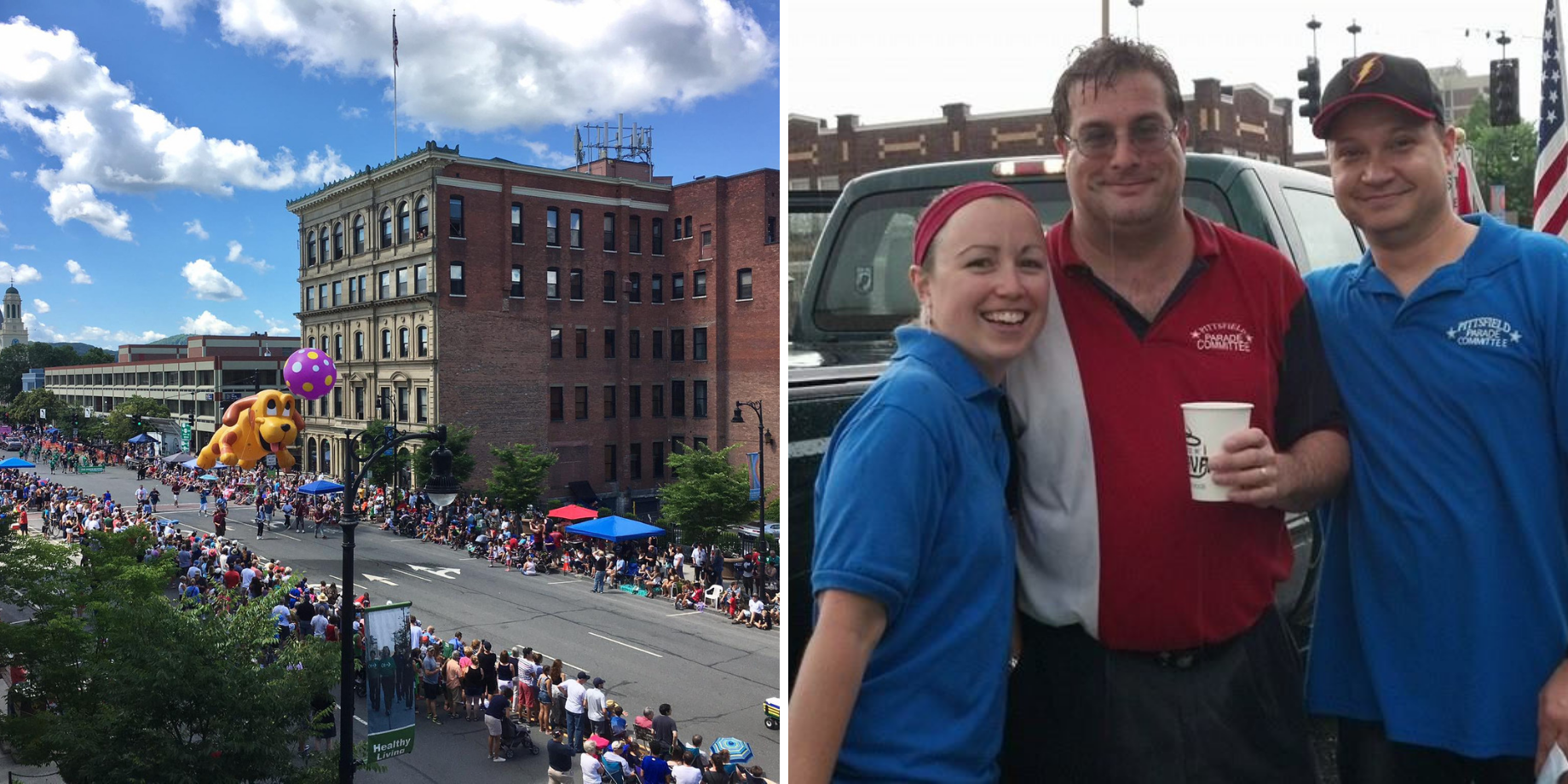 The Fourth of July is just around the corner and yes, there will be a Pittsfield Fourth of July Parade. After an announcement by the Pittsfield Parade Committee earlier this year stating the annual Pittsfield Fourth of July Parade was in jeopardy, a rallying of efforts by the community have secured the parade for 2019 and have demonstrated the importance of this 200 plus year institution to our community. The 2019 Parade – with the theme “The Berkshires – Past, Present and Future” – will begin at 10 am on July 4, starting its route on South Street at the West/East Housatonic Street intersection and will end at Wahconah Park on Wahconah Street.

Peter Marchetti, President of the Pittsfield Parade Board of Directors, spoke with us about the Past, Present and Future of the Pittsfield Fourth of July Parade. “We’ve done a terrific job of saving the parade for 2019 and really making a great dent into 2020”, says Marchetti. “We know as an institution what we really need to focus on for the remainder of 2019, and as we begin the planning for 2020, we need to take some hard looks at how we can we can secure the sustainability of the parade and diversify the way that we conduct our fundraising efforts.”

“We have to step back and say ‘ok, for the City of Pittsfield, based on what we can fundraise, what size parade can we undertake in any given year?’ And if our fundraising seems to be slowing up, then we need to make some cuts and changes…. Are there ways that we can become more efficient, and are there items that we can reduce from the parade without impacting the quality of the parade?…  (We may have to decrease) how many giant helium balloons or marching bands that we have, and as part of that conversation, we need to make sure people really understand that the parade is not free.”

The Pittsfield Parade Committee spends $30,000 to $40,000 on musical units which is their largest expense, followed by approximately $20,000 for the giant helium balloons and all their related expenses. The parade booklet is their third largest expense which brings the total of these three items to $61-$71 thousand, a cost that does not include the multitude of other items that must be purchased to bring the parade to the masses.

“The original message (in early 2019) was a cry for help to the community that 2019 could potentially be the last parade,” says Marchetti. Once the article came out in The Berkshire Eagle, within days, Bob Heck had organized an unsolicited music bingo event to raise funds. Happy Together Band came forward and offered to donate their talents for a fundraising dinner dance if the parade committee could find a location and organize the event. The dinner dance held in June was such a success, they had to turn people away at the door as the space had reached capacity. Steve and April White also came forward and organized “Rock the 4th: Save our Parade!”, an event that will be held on Sunday, June 23 from 12 to 7 pm at the Tavern at the A (303 Crane Ave in Pittsfield). The event will feature live music from local musicians and bands and Bowie the Clown will be in attendance for the kids. Tickets to this event are a $20 donation to the Pittsfield Parade Committee, with children 12 and under being admitted for free. There will be a pasta dinner and over 200 choice raffle and auction prizes donated by the community.

There will be additional opportunities to support the Pittsfield Fourth of July Parade throughout 2019. The Parade Fundraiser Oldies but Goodies Show: “We Like that Old Time Rock n Roll” will be held November 22 and 23, 2019 at Taconic High School, and of course, be sure to drop some cash in the buckets carried along the parade route by the Bucket Brigade the day of the parade. You can also donate anytime via PayPal at pittsfieldparade.com and you can follow their Facebook page to find out about additional fundraisers and events throughout the year. A $25 donation will also secure you the 2019 Pittsfield Parade Poster for “The Berkshires Past, Present, and Future” created by local artist Marguerite Bride.

“The big message is don’t give up,” says Marchetti. “I think that we’ve been able to secure a place for the parade in the coming years, and I’ve always said, (the Parade Committee members) are the stewards of a great tradition and as long as the community continues to step up and support that tradition, we’ll make sure that there is a parade. (This year) when you take a step back and look at the bigger picture, the community is saying, loud and clear, that they want a parade to continue. Keep an eye on us, keep us in the forefront, and donate if and when you can, and long-term we will be able to become self-sufficient.”

Marchetti, who has served the Pittsfield Parade Committee in some capacity since 1986, says for him being a part of the parade is “about the smile that you see on people’s faces on the Fourth of July, and it’s a wide variety of smiles (that you see), from the 4-year-old kid – seeing a cartoon character or a balloon or the big red firetruck – to the veterans you see along the parade route saluting the flag, and just kind of feeling their sense of patriotism and pride as everything is taking place”.

“I’m also always fascinated by the number of people who are showing up to sit in their same spot (every year) at 6 am…. I love that rush of seeing people show up 4 plus hours before an event starts,” says Marchetti.

Before assuming his post as President of the Pittsfield Parade Board of Directors, Marchetti spent time in the mid-80s serving as a low-level corps-guide at the drum corps competitions. His initial interest in volunteering for the music-side of the Parade Committee was rooted in his time spent in band in high school where he played clarinet and alto-sax and served as drum major. After he moved up onto the Board, he served as Treasurer before becoming Board President about 5 years ago. There are no paid positions on the Pittsfield Parade Committee and Board of Directors, and Marchetti, who is also the current Pittsfield City Council President as well as Senior Vice President of Retail Banking & Operations at The Pittsfield Cooperative Bank, has his hand in a variety of parade-related tasks from publicity to fundraising to verifying applications and chasing down ads and descriptions for the parade booklet.

At this year’s parade, Marchetti looks forward to the purple heart balloon which will be very early on in the parade line-up. Under Marchetti’s leadership, the military units which were once scattered throughout the parade line-up have been moved to the front. “That’s the pretty solemn piece of the parade,” says Marchetti. “It’s honoring all of those who fought for our freedom so we could have the parade. Then we flip a switch and it becomes the fun part.”

For Marchetti, the purple heart balloon is a visual reminder of why we’re having the parade. “We want to have a blast and we all want to see the giant helium balloons and the marching bands, but we need to recognize that we fought for our freedom and we have our freedom, and there’s a special piece of remembering (in the parade) for those that have given us the freedoms that we have today.”

The Pittsfield Fourth of July Parade has been an annual tradition since 1824… or is it 1812? The Parade Committee has been touting the 1824 date for some time, but a recent email from a local citizen doing genealogy research has suggested that the first parade in Pittsfield occurred in 1812 when “the Washingtonian people” marched down the street. The Parade Committee has someone doing the research on the new date now.

In the 1970s, the fire department ran the Fourth of July Parade. The parade ended at Wahconah Park with a carnival and the fireman’s muster. Eventually, the fire fighters gave up control of the parade and a parade committee came forward, working for several years to provide the parade, until running into issues like fundraising and burnout that we run into today. 1977 was the only year on record since 1824 that there was not a Fourth of July Parade in Pittsfield. The parade committee established after the fire department eventually went defunct, and municipal government was left to try to revive the parade. Ed Rielly, Gary Grunin, and Jim Brassard stepped up with a big ‘Save the Parade’ campaign, seeing similar results from the community as we’ve seen this year. In the mid to late 90s, the current parade committee formed as a 501(c)(3) and has been presenting the parade ever since. The Board currently consists of 15 directors with a president, vice president, secretary, and treasurer, and the committee fluctuates, at times having up to 50 people. The board separates the parade into 6 or 7 focused categories for the committee such as music, fire departments, community groups, elected officials, floats, and banners.

The fact that a smaller community like Pittsfield has been doing something for over 200 years is remarkable to Marchetti. Through the tireless efforts of the Pittsfield Parade Committee and the overwhelming support of the community, the tradition of the Pittsfield Fourth of July Parade will continue. It’s about planning ahead not just for next year, but for the next five years, and creating a model of sustainability to ensure that the tradition will continue for future generations. This Fourth of July Parade, there will be 34 people on the streets volunteering on behalf of the Parade Committee. Why do they come back year after year? Marchetti sheds some light, “It’s watching somebody’s grandfather and some 7-year-old boy saluting the flag at the same time. That carry down of patriotism, pride and respect is overwhelming for us.”

Pittsfield Parade Committee Inc. is a registered 501(c)(3). Donate via PayPal at www.pittsfieldparade.com/support-the-parade

Purchase a Parade Poster from 2019 or previous years at www.pittsfieldparade.com/parade-posters

View the Parade Lineup at www.pittsfieldparade.com/parade-lineup