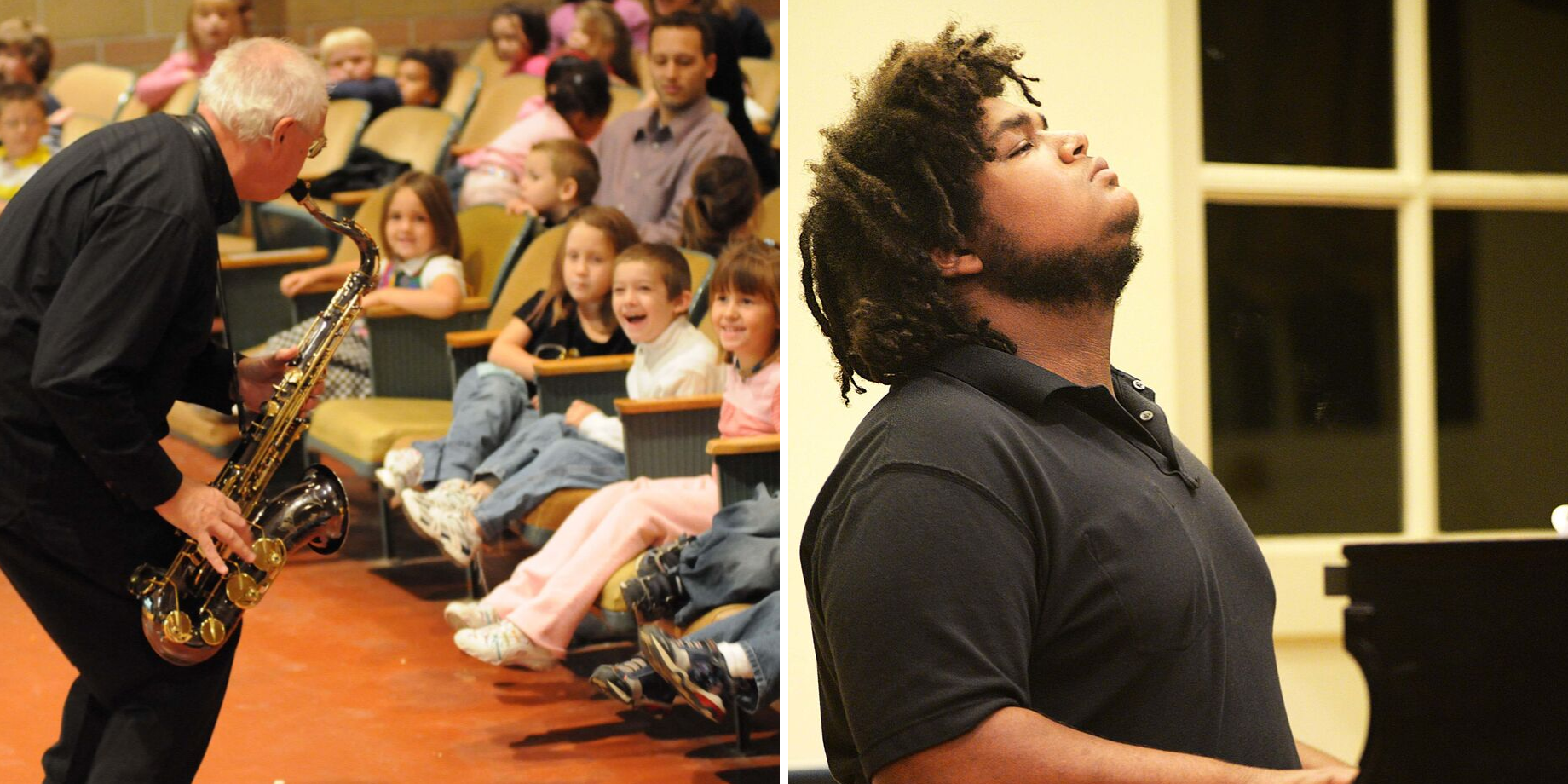 Berkshires Jazz will be bringing two terrific events to downtown Pittsfield this fall beginning with the Berkshire Jazz Showcase on September 28 and culminating with the Pittsfield CityJazz Festival, October 11-20. Established in 2009, Berkshires Jazz, a 501c3 organization, has made it its mission to preserve Jazz, America’s indigenous art form, and nurture its growth by presenting high quality jazz programs, fostering jazz education and promoting the local jazz scene. Edward Bride, founder and President of Berkshires Jazz, spoke with us about the history of the organization and the two upcoming events.

The Pittsfield CityJazz Festival was formed in 2005 to “present mainstream and traditional jazz in a downtown setting”. The first festival in 2005 opened with The New Black Eagle Jazz Band and closed with The New England Jazz Ensemble who released a live recording of their appearance. The festival was started almost by accident by combining these two concerts over one weekend. Now the festival spans 10 days and 2 weekends.

In that first year, committee member and Festival co-founder, Andy Kelly came up with the brilliant idea  to include local musicians as part of the Pittsfield CityJazz Festival and to place them in downtown restaurants was a natural fit. Now the festival includes Jazz About Town, featuring local musicians in restaurants across the city all with no cover charge. This addition has really created the festival feel.

Berkshires Jazz, Inc. was formed by the founders of the Pittsfield CityJazz Festival in 2009, becoming its own 501c3 organization and positioning itself to continue the outstanding work they had started in 2005 while also including year-round programming and an educational component.

Berkshires Jazz’s most recent addition to its programming is the Berkshire Jazz Showcase which is in its second year.

“We came to an awareness after 13 years that we probably weren’t giving sufficient attention to one of the greatest resources we have here in Berkshire County, which is our own local talent,” says Bride. “We had been concentrating on bringing traveling musicians in, but the more you go out on a weeknight (here in the Berkshires) you realize what a great talent pool we have here… so we decided to do a main stage event that would only feature local musicians. That’s what gave rise to the Berkshire Jazz Showcase in 2018.”

This second annual Berkshire Jazz Showcase was postponed in August due to inclement weather, and the new date is Saturday, September 28, 2019 from 12 to 5 pm at the Pittsfield Common on First Street. This event will be held rain or shine as the Common Room at the Zion Lutheran Church, an acoustically lovely alternative, has been established in case of rain.

Berkshires Jazz will bring five of the most popular regional bands to the Common for a free and family friendly event. Bring a chair or a blanket and enjoy a lovely day on the lawn. There will be food vendors including ice cream, Lucia’s Latin Kitchen, Mad Jacks BBQ, Zion’s popcorn wagon, and a pop-up beer and wine garden by Wandering Star Brewery.

Each band will play 50-minute sets beginning on the hour. From 9 am to 1 pm, you can also enjoy the Pittsfield Farmers Market, which will also have music until the noon kickoff of the Showcase. The lineup for September 28 is as follows:

12 pm: Gina Coleman and Misty Blues (A perfect opener as blues was the foundation of jazz.)

1 pm: Paul Green and Two Worlds (Green will feature songs from his new cd of original music – a fusion of jazz and Jewish music)

We asked Bride: ‘If you are not a jazz fan, why should you come?’

“The key word is free, so if you’re curious, what’s the harm in stopping by,” says Bride. “A lot of people when they hear the word jazz think of Kenny G, and he’s a love or hate type of guy, or they think of some 1940s stuff or some acid stuff…. A lot of people don’t understand what jazz is and you can’t really define it. If you look at the list we have (for Sept. 28), there are five very different groups, so you could stop by towards the middle of one and stay ‘til the middle of the next one, and you might hear two different things and say ‘I didn’t know that was jazz, I kinda like that’. That’s often the reaction. People come out of curiosity who aren’t really jazz followers and sometimes they stay the whole day.”

Bride’s passion for jazz began in the 8th grade while playing rock-and-roll records at a friend’s house. “A buddy of mine put on a Stan Kenton record, the big band of that era, and I just was captured by it. I can remember the song. I can remember the setting, and it was more than 60 years ago. I got to actually meet Stan Kenton when I was in high school. He became the chief advisor of the intercollegiate jazz festival at Villanova University, when I was the student chairman.” While serving on that jazz committee at Villanova, Bride also met Tim Hauser (founder of Manhattan Transfer), Jim Croce (balladeer and storyteller), and Thomas Picardo (who became Tommy West, a music producer). Later in life, Bride served on the board of the New England Jazz Ensemble. After relocating to Pittsfield, a chance run-in with Villanova graduate, and then mayor, Jim Roberto and his wife Ellen, and a 2004 New England Jazz Ensemble fundraiser for The Colonial Theatre at The First United Methodist Church combined to set the wheels in motion to create the first ever Pittsfield CityJazz Festival in 2005.

This year’s Pittsfield CityJazz Festival (the 15th), will run October 11-20, and will include “a rare pairing of mother-daughter vocalists Stephanie Nakasian and Veronica Swift, Cuban piano standout Dayramir Gonzalez, jazz prodigy Anton Kot, (and) a ‘jazz crawl’ (a.k.a. Jazz About Town) that features local musicians in downtown venues.”

The Festival kicks off on Columbus Day weekend in downtown Pittsfield, October 11 and 12, with Jazz About Town. The full schedule and locations will be announced one week prior to the event. Dottie’s Coffee Lounge will host Jeff Link on bass and Kirk Scott on guitar on Friday, October 11, 7 to 8 pm. There will also be a jazz brunch on October 13, 10 am to noon at Dottie’s.

“On Wednesday, October 16, (at 7 pm) Anton Kot, a 16-year-old pianist and drummer, will make his Berkshires debut in the annual Jazz Prodigy Concert (at the Berkshire Athenaeum),” says Bride. “Kot is from Milford, Connecticut, and was a discovery of the Litchfield Jazz Camp. The Jazz Prodigy Concert features a young artist (senior in high school or younger) who has not been recorded commercially and who is expected to become a force in jazz.” Anton will be paired with local musicians for a terrific free concert sponsored by the Friends of the Berkshire Athenaeum.

“Headline weekend starts on Friday, October 18, with another prodigious piano talent, Dayramir Gonzalez and his quartet. A Cuban jazz pianist, composer, arranger and music visionary, Gonzalez has appeared at leading jazz venues worldwide. His group includes Dean Torrey, bass; Juan Chiavassa, drums; and Arturo Stable, a master Cuban percussionist and composer. Gonzalez’s music embraces the pulse and mystique of New York City, as well as the allure of early 20th century Cuban sonic leanings and the cultural roots and myths of sensually fused Yoruba religious elements.”  Gonzalez will be performing on the Steinway at the Berkshire Museum. Ticketing information is not yet available, please check http://berkshiresjazz.org for updates.

The keystone event of this year’s Pittsfield CityJazz Festival is “a rare pairing of legendary vocalist Stephanie Nakasian, a Berkshire favorite, with her daughter, Veronica Swift, the fastest-rising vocalist on the jazz scene today,” says Bride. The event will take place on Saturday, October 19 at The Colonial Theatre. The Berkshires Jazz Youth Ensemble will open at 7:30 pm, and pre-show entertainment will be provided by pianist Ben Kohn at The Garage (the Colonial’s lobby), starting at 6 pm. Tickets are $25 and up and can be purchased at https://www.berkshiretheatregroup.org/event/pittsfield-cityjazz-festival-veronica-swift-with-stephanie-nakasian/

The festival concludes on October 20 with a jazz brunch featuring DB Squared NOT Square from 10 am to noon at Dottie’s Coffee Lounge. The group features two mainstays of the area’s jazz scene: Dan Broad, bass and Dave Bartley on piano and vocals.

A piece on Berkshires Jazz would be remiss if it did not mention the outstanding educational work that the organization does in our local public schools. Jazz In Schools features performances, discussions, and demonstrations of improvisation and harmony by the Pittsfield Sister City Jazz Ambassadors, led by guitarist and teacher Andy Kelly. “Over the years, literally thousands of students have experienced live jazz in the classroom and assembly halls,” says Bride. “School principals and administrators have praised this community commitment of the festival and the positive impact it has had on students. Thanks to generous underwriters, (such as The Feigenbaum Foundation), Jazz In Schools is provided at no cost to the school system.”

Featured images in header (left to right): Charlie Tokarz entertaining a student assembly; Franz Robert, one of the “jazz prodigies”

“In an effort to keep prices at an accessible level, the Pittsfield CityJazz Festival has successfully partnered with several local, regional, and national organizations to underwrite various components.”

Make a specific donation to receive these gifts:

$500: Autographed copy of Ken Franckling’s “Jazz In The Key of Light”